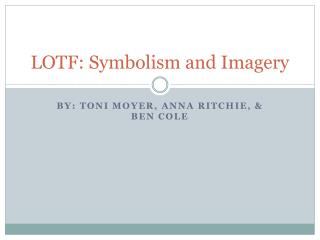 DON TIBURCIO DE ESPADAÑA - . noli me tangere. symbolism. values. be yourself. the only thing necessary for the triumph

“The Almond Tree” - . by jon stallworthy. “ all the way to the hospital the lights were green as peppermints ”.

Setting, Mood and Imagery - . mood - the feeling of a story, the atmosphere that is created. writers use imagery (

Symbolism Project on the book “The Pearl” by John Steinbeck - . project by yohannes sitorus. symbolism #1: the pearl.

Symbolism in The Great Gatsby - . gray. gray is the color of dreariness. it lacks spirit and definition. it shows no hope

Impressionism and Symbolism, Primitivism - . in the modernist movement, there were many parallels between music and other

The FEMINIST Self - . or the gender-conflict self. charlotte perkins gilman. “the yellow wall-paper”. the

Learning Objectives: To understand symbolism in literature. To Analyse Symbolism Across Three Texts - . what is