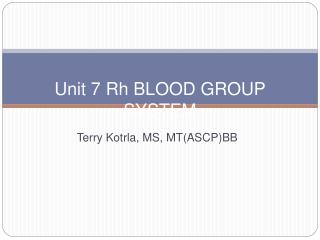 Unit 7 Rh BLOOD GROUP SYSTEM. Terry Kotrla, MS, MT(ASCP)BB. Introduction. Rh is the most important blood group system after ABO in transfusion medicine. One of the most complex of all RBC blood group systems with more than 50 different Rh antigens.

UNIT 6: Cardiovascular System Review - . blood. which of the following is not a function of blood? 1) deliver oxygen and

TYPE &amp; SCREEN - . what does the blood bank do with that tube?. blood group antigens. markers on various red cell

Unit 5 Blood - . 5.2 presumptive testing. unknown stain at a scene. questions to be answered: is it blood? is it human

The Circulatory System - . circulatory system. the organ system made of the heart, blood vessels and blood transports