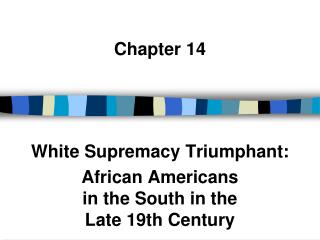 Chapter 14 White Supremacy Triumphant: African Americans in the South in the Late 19th Century. I. Politics. End of Reconstruction Black men forced out of office Limited black participation in politics No power over white people Did not challenge white domination.

Chapter 7: The Making of African Americans in a White America - . slavery. the experience of african-americans has been

African Americans and Civil Rights - . segregation. laws had separated the races since the late 1800s. due to

Rebuilding the South - . section 1 chapter 17. focus questions. what effect did the end of the civil war have on african

Reintegration of the American South - . c ompare and contrast the experiences of african americans in various us regions