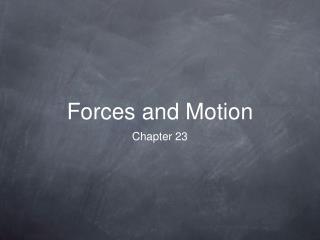 Forces and Motion. Chapter 23. What is motion?. Motion- an object changing position. Types of Motion. There are 2 types of motion: Distance Displacement. Distance. Distance is the total path traveled. Look at the map- Is the dotted line or the straight line distance?. Displacement.

NET - 01. the overall force on an object after all the forces are added together is called the ___ force. net. 02.

Force and Motion in Two Dimensions - . chapter. forces in two dimensions. 5. in this chapter you will :. represent vector

States of Matter - . kinetic molecular theory. particles are always in motion. temperature is a measure of average