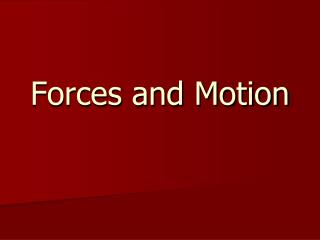 Forces and Motion. Force. FORCE is a push or a pull applied to an object that will cause it to start moving, stop moving or change its speed or direction Demonstration. Force. Force = Mass x Acceleration F = MA Force is measured in Newtons (N) which is one kilogram meter per second squared

S-15 - . name all the forces that you think are acting on the creature below. dynamics: newton’s laws of motion. ap