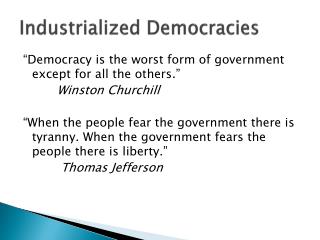 Industrialized Democracies. “Democracy is the worst form of government except for all the others.” Winston Churchill “When the people fear the government there is tyranny. When the government fears the people there is liberty.” Thomas Jefferson. Presentation Outline. Industrialized Jeopardy - . michael leskoviansky. bibliography. minds of innovation 200. this individual started out as a