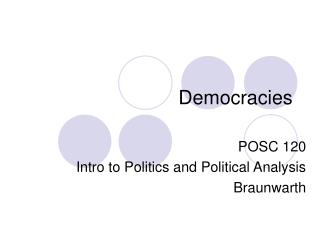 Democracies. POSC 120 Intro to Politics and Political Analysis Braunwarth. Ideology. A coherent world view that purports to explain how things “should be” Generally has some assessment of Human Nature As well as an assessment of how society should be set up. Classical Liberalism.