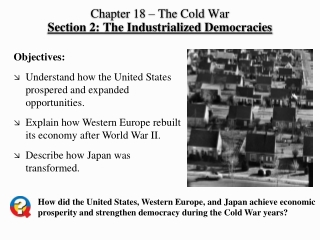 Chapter 18 Test Review The Cold War - . question and answer samples and techniques. the main goal of this was to stop the

Chapter 16, Section 3 The Cold War Expands - . objectives. describe the causes and results of the arms race between the

The Cold War, part 2 - . the “thaw”. in early 1953, stalin dies and eisenhower is inaugurated. after brief struggle

Chapter 18 Section 2 The United States Declares War - . americans did not want to be pushed into war at first however,

Chapter 29 Section 2 (Cold War) - . both the united states and ussr worked hard to develop new weapons bringing in the

Chapter 12 Section 3 The Cold War Expands - . 1950’s. us and ussr most powerful nations in the world! great fear