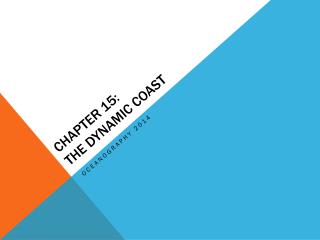 Chapter 11: The Dynamic Planet - . the pace of change a. the geologic time scale   ii. earth’s structure and The Dynamic Shoreline - . the land/sea interface is a dynamic environment. physical and geologic processes shape the

Chapter 15 Earth’s Climates - . climate refers to the statistical properties of the atmosphere and is concerned with

Chapter 15 – A New Civilization Emerges in Western Europe - . stages of postclassical development between the 6th and

COASTAL OCEAN - . • we will start with chapter 11 first, then chapter 10. coastal ocean. shallow ocean area over

Politics, Immigration, And Urban Life 1870-1915 - . chapter 15. the gilded age suggests that there was a glittering layer

Ch. 15 The Biosphere - . 15.1 biosphere. part of earth where life exists all of earth’s ecosystems biota – all living