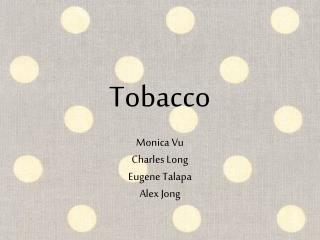 Tobacco - . chapter 16. what’s tobacco?. tobacco is a plant. it has large leaves that have been smoked in many forms

Tobacco - . ---farm to warehouse. a begin slide show. bright leaf tobacco in the field. a next slide. mature tobacco

Tobacco - . 6 th health 4 th quarter. tobacco. list all forms of tobacco that you can think of! why do you think people

TOBACCO - . by: hgt. tobacco is a plant with leaves that are used to make smoking tobacco- used in cigarettes, cigars,

Tobacco - . bell ringer. pick up test your smoking i.q. from the front chair and complete quietly. do not work on the

Tobacco - . chapter 20, lesson 1. the health risks of tobacco use. advertisements are with healthy, attractive people