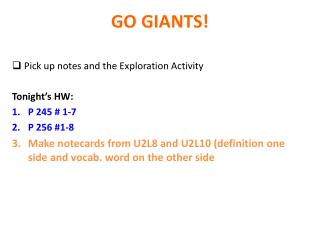 Networking Primer - The Internet and the Link Layer ECE 256 - . romit roy choudhury dept. of ece and cs. slides are from

The New York Giants - . www.giants.com. the best team on the gridiron. next slide. presented by: kyle cavalea project #12

The Pygmy Dipole Resonance – status and new developments - . from giants to pygmies – a short history electromagnetic

Renaissance Astronomy - . isaac newton, who discovered the law of gravity, once wrote, “if i have seen further, it is

National Preparedness Month - . “in football and in life, safety is important. we don’t always know what obstacles

- Living in Testing Times - Prenatal Testing and Procreative Responsibility - . &quot;ours is a world of nuclear