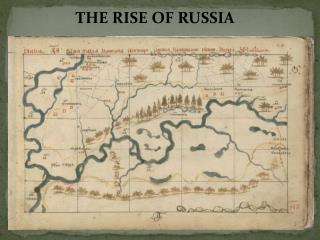 THE RISE OF RUSSIA THE RISE OF RUSSIA

Russia and Eastern Europe - . natalia s. gavrilova leonid a. gavrilov center on aging norc and the university of chicago

Unit 5 notes Chapter 15 Physical Geography of Russia and the Republics - . i. landforms and resources a. size of russia

The Rise of New Monarchies - . what is a monarchy?. a form of government in which supreme power is actually or nominally

Knowing the Time Romans 13:11-14 - “now it is high time to awake out of sleep: for now is our salvation nearer than

My country in the world . This is Russia ! - . russia is one of the largest countries in the world. the vast territory of

History 11 - . end of the byzantine/rise of russia. decline. after the great schism (1054), the byzantine empire was

Napoleon’s Rise to Power - . earlier military career  the italian campaigns: 1796-1797  he conquered most of

The Rise of Totalitarianism - Witness history audio: the jazz age. the rise of totalitarianism. changes in society after

Growth of Russia - . mongolian influence ivan’s time of troubles romanov’s western or not western. russia and its

Russia : a brief history - . introduction. 9000 km from east to west and 5000 from north to south ural mountains divide