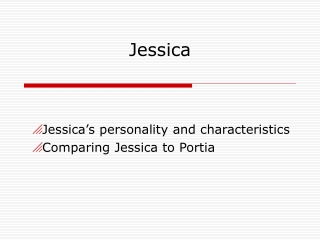 Jessica. Jessica’s personality and characteristics Comparing Jessica to Portia. Jessica VS Portia. An important role as a female character in the male-dominated society in The Merchant of Venice. Intelligent to have come up with a plan to disguise herself in order to achieve her purpose. JESSICA - . when i was a baba. i was born on june 27 th 1994 in parkersburg west virginia. i lived in charleston west

Jessica - . theme song to my life. voice of truth. by: casting crowns. this song is a reminder that god is the voice that

Jessica Buurman - Is one stop shop for fashion lovers who are looking for quality, variety, and affordability at one

Jessica King - Evaluation question two: how effective is the combination of your main product and ancillary texts?.

JESSICA MOUBOY - . early life jessica was born on the 4 th of august 9198 she was raised in darwin, northern territory.

JESSICA EGER - . i am a big uofl fan. i work at a daycare; therefore i enjoy children’s artwork. i am fascinated with

Jessica Valenti - . “if feminism is enjoying a revival among young women, much of the credit should go to women such as

Jessica Ghawi - “i was shown how fragile life was on saturday. i saw the terror on bystanders' faces. i saw the victims