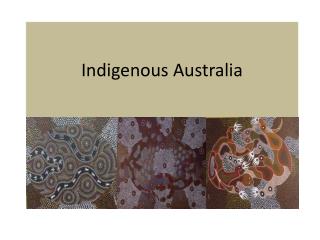 Indigenous Australia. The Dreamtime. The Dreamtime for Aboriginal people is the time which the earth received its present form and in which the patterns and cycles of life begun.

Indigenous Religions - . everything is alive. indigenous descendants of original inhabitants of lands now controlled by

INDIGENOUS - . people native to a land. province. equivalent to states in canada. mitis. people in canada of mixed

Indigenous Crime - . the problem the solution. the problem. high concentration of indigenous crime majority of this crime