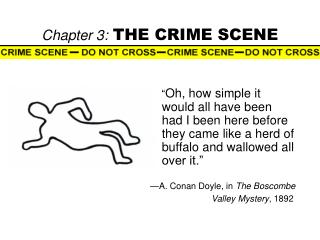 Chapter 3: THE CRIME SCENE. “ Oh, how simple it would all have been had I been here before they came like a herd of buffalo and wallowed all over it.” — A. Conan Doyle, in The Boscombe Valley Mystery , 1892. CRIME SCENE. Students will learn: Electronic Crime Scene Investigation: A Guide for First Responders - . written and approved by the technical working

Wednesday 4/9/14 - . aim: how is dna useful to forensic science? do now: list at least 4 sources of dna that could be

An alternative name to conceal identity - . alias. an explanation that removes a person from the scene of a crime. alibi.