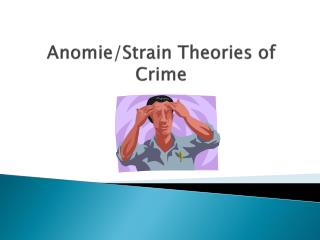 Anomie/Strain Theories of Crime. Anomie and Strain Theories. Challenge biologically based theories Argue internal drives and motives are not implicated in crime Rather, the motivation for crime is derived from society Societal forces pressure people to commit crime I. relational theories (Platonic theories) - Knowledge has a foundation there are basic objects and facts objects: the

Chapter 3 Crime and Social Control - . “unjust social arrangements are themselves a kind of extortion, even

MI – Crime Scene Shark Bait - . name some of the factors/ concepts that are misrepresented on the tv crime programs.

Deformation of Rocks - . how rocks deform brittle-ductile behavior faulting and folding. stress and strain. the keys to

Why Crime Happens - . sociological theories of crime. before we get started…. what do you see? an elderly woman? a