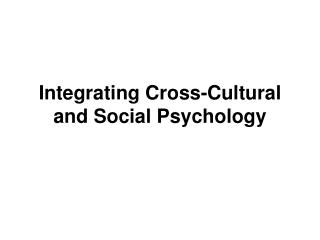 Integrating Cross-Cultural and Social Psychology. What are the key differences between the work done by S ocial Psychologists and Sociologists? Both examine specific factors that contribute to behavioral and group phenomena. Critical Thinking in Cross-Cultural Psychology - . the evaluative bias of language. no clear distinction between

What is Culture and what is Cross-cultural Psychology? - . assoc. prof. james h. liu centre for applied cross cultural

Cross Cultural - . elements of healing. worldview. interpretation depends upon the contextual world from which the

Social and Cultural - . what to learn. how engineering (projects) affects the social and cultural aspects how society