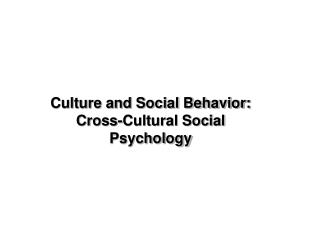 Focus on the Social Context: Cultural/Contextual Psychology - . i. introduction a. introduction. are you a different

CONTRASTING CULTURE, RACE, PERSONALITY, and POPULAR CULTURE - . culture and race. race is not culture race is a social

What is Culture and what is Cross-cultural Psychology? - . assoc. prof. james h. liu centre for applied cross cultural

Outline of Lecture Session on Cultural Influences in Social Behavior - . a. reminder that in the text chapter 2 --