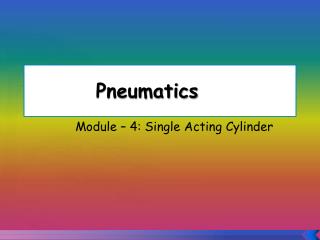 Pneumatics - . 2007 frc kick-off workshops. what’s wrong with pneumatics?. too heavy! too springy! too much demand on

PNEUMATICS - . cw2 westbrook. introduction. pneumatics, from the greek word “pneumaticus”, which is the branch of

FRC Pneumatics - . nate laverdure frc team 122. everything i wanted to know. frc pneumatics ,. but was. about. afraid to

Pneumatics Automation - Pneumatics is the use of pressurized gas to enable mechanical motion. ... pneumatic automation

Basic Pneumatics - . introduction. air has existed since the beginning of time. man has harnessed the power of the wind

BL Pneumatics stockists of Pneumatics components - Bl pneumatics, where we have been offering our fully independent

Pneumatics - Use - . some examples of everyday pneumatic systems are shown below. how many do you recognise?. pneumatics

Pneumatics - Use - . some examples of everyday pneumatic systems are shown below. how many do you recognise?.

737 PNEUMATICS - . menu principal. this presentation includes the sources of air, the major system components and the way