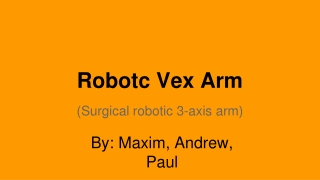 Vex Robotics - . introduction. over the next 4 -5 weeks you will design and build a robot to accomplish a series of

VEX Testbed - . photos and sensor instructions. vex testbed. sensors. we will use the motors and sensors in your toolkit

Vex factor - . familiar: c ody is baylie’s brother he suffers from dyslexia. frequent: 1 in 5 kids have dyslexia. on

Vex Robotics - . easy c programming. what is programming?. technically, programming is the process of creating a sequence