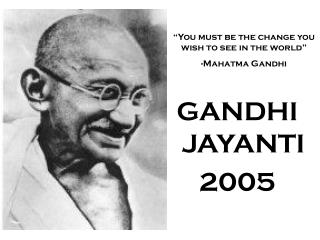 Meaningful Expectations and Consequences - . a workshop presented by: the new york state center for school safety.

Assassination of Mahatma Gandhi - . by nicole sharma. gandhi’s belief of non-violence. “an eye for an eye only ends

Gandhi - . by riya rathod . who was gandhi? . he was a leader of the nationalism in britsh-ruled india. gandhi was mostly

Gandhi in India - . india. attitudes towards gandhi. moderates did not like the use of satyagraha. extremist leaders