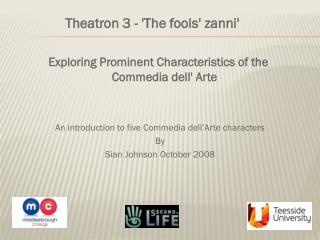 An introduction to five Commedia dell’Arte characters By Sian Johnson October 2008. Theatron 3 - 'The fools' zanni' . Exploring Prominent Characteristics of the Commedia dell' Arte. Translated from Italian as “Comedy of Art”

Chapter 11 - . theatre’s revival in europe. theatre in the renaissance the commedia dell’arte. period of the

Commedia dell’arte - . https://www.youtube.com/watch?v=h_0taxwt8hy. background. commedia was a designation given to

La Commedia Dell’Arte - . by: venesha powell. where . italy- began there during the 14 th century until the 18 th and

How to Gain the Best Features While Traveling Over a Long Di - Stance? buymytrip share all the important points that make

Cloak and Dagger - . assassination through poisoning. learning objectives. appreciate the role that poisons have played

e-Notary - . what is e-notary?. e-notary. centre of registers and information systems. the environment that helps