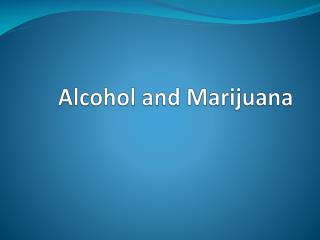 Alcohol and Marijuana. What is Alcohol?. Alcohol is produced by fermenting or distilling various fruits, vegetables, or grains. In beverages, pure ethyl alcohol (clear and colourless) is mixed with other ingredients that affect the colour and reduce the alcohol content.

ALCOHOL - . mrs. mccord 8 th grade health. what is alcohol?. a depressant drug that enters the bloodstream and slows the

Alcohol Licensing and Policy in Wisconsin—The Basics - . attorney nina j. emerson. there is no right to an alcohol

The Brain’s Response to Drugs - . an power point “magazine”. marijuana. hi, my name is c/sgt cadet. welcome to my