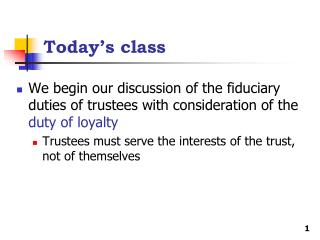 Today’s class. We begin our discussion of the fiduciary duties of trustees with consideration of the duty of loyalty Trustees must serve the interests of the trust, not of themselves. Trustee powers.

Class Introduction - Mr. askew. &quot;ask you&quot;. class introduction. don't let this be you !. what you learn

Ever think to yourself, “Do I need to go to class today?” - . have you ever not wanted to do homework when you got

Mirza vranovic - . game design. 1/30/14. mirza vranovic. -today we talked about good game elements. -there was a

Welcome to class  - . good to have you here today! dr. brennan. the importance of listening. our motives and/or needs

Today’s Class: Additives, Pesticides, and Natural Toxicants - . main points: what is an “additive”? how are