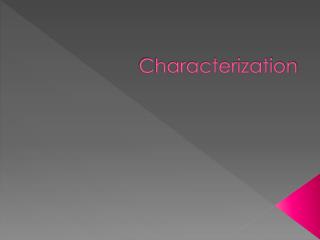 Quick ♫ on Characterization - . what to pay attention to when reading and writing about “the most dangerous game”.

Methods of Characterization - . authors give their readers pieces of puzzles to solve their character’s identity. Characterization - . how are characters revealed?. description by the narrator dialogue actions thoughts feelings. what

Web Characterization: What Does the Web Look Like? - . dr. frank mccown intro to web science harding university. this

“Thank You, M’am ” - . short story by langston hughes. objective. through the study of complex plot elements, the

What is Characterization ? - . it is the method used by a writer to develop a character. by (1) showing the character's