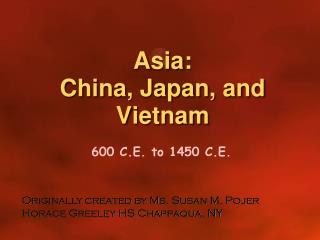 The Vietnam War - . how did american involvement in southeast asia escalate?. 1941 : the allies sign the atlantic

The Geography of Vietnam - . vietnam is one of the ten countries that compose southeast asia it is bordered by china on

The Age of Exploration - . outcome: china and japan’s reactions . the age of exploration. setting the stage east asia

The Music of Asia - . a breif overview. asia has many countries and each has a unique mix of sounds and styles. we will

The Age of Exploration - . outcome: china and japan’s reactions . the age of exploration. setting the stage east asia

The Shift to Asia - . china lost. the defeat of japan in wake of ww ii resulted in many opportunities in former occupied

INDEPENDENCE IN ASIA - . decolonization in south east asia. vietnam, the philippines, malaysia. . vietnam. part of the

Vietnam War - . vietnam war. vietnam had never been under its own rule china- ruled for hundreds of years france- ruled