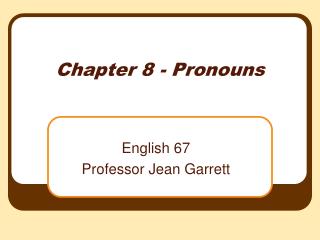 Chapter 8 - Pronouns. English 67 Professor Jean Garrett. Pronoun Case. Case is the form a pronoun takes as it fills a position in a sentence. Like nouns, pronouns can function as either subjects or objects in a sentence.

Pronouns - . pronouns. a word used to take the place of a noun (or group of words acting as a noun) ex. michelle went to

Pronouns - . pronouns. a pronoun is a word that takes the place of one or more nouns . personal pronouns. pronouns that

Pronouns After Than or As - . you have to fill in the omitted words (to yourself) to determine whether to use a pronoun