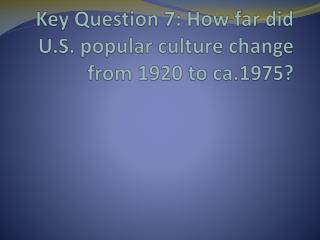 Key Question 7: How far did U.S. popular culture change from 1920 to ca.1975?. Literature and Movies. Magazines and books become popular Radio and movies begin to takeover. How did the film industry grow and change during the 1920s? John Fiske: Understanding Popular Culture - “culture” is the constant process of producing meanings of and from our

CULTURE OF FRANCE - . let’s think together !. what is culture for you ? which are the elements that compound your own

Rap Culture or Crap Culture? - . a presentation by: agent benjamin middleton. my argument. i think that rap culture is