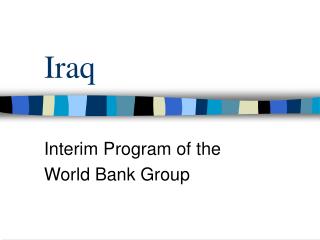 Iraq. Interim Program of the World Bank Group. History of the Bank in Iraq. Iraq was a founding member of the IBRD Received 6 IBRD loans between 1950-1973 Last loan closed in 1979 Non-accrual status since 1990. Reengagement with Iraq. Watching Briefs launched in early 2003 Islamic State: a chronology - The militant islamist group that has seized swaths of iraq and syria has its roots in the

Taking back Iraq - As u.s.-led offensives drive back islamic state in iraq, efforts to stabilize liberated areas are

What modern day country is the home to those who call themselves the Persians? - . iran. what is the religion of most