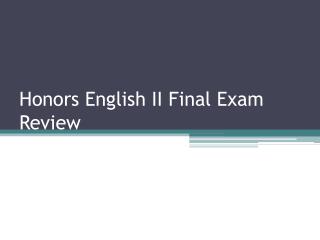 Honors English II Final Exam Review. What is anaphora?. AQWF. What is the main reason why the boys enlisted in the army? Kantorek made it seem like it was their duty…. Cyrano. How does Cyrano show respect for art?. TFA. What is the name of the author? Spelling Counts . Antigone.

Final Honors Biology Exam Review 2014 - . warning!!!!!!. this is not a substitute for your own study notes. you are to do