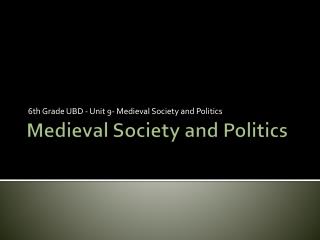 Christianity and Medieval Society - The big idea the christian church was central to life in the middle ages. main ideas

Symbols and Medieval Society - . symbol. what is a symbol? a way of identifying and communicating an idea or meaning with

POLITICS, SOCIETY AND IDENTITY - . ‘society is inside man and man is inside society.’ arthur miller, the shadow

Spanish Politics and Society - . the institutions of spanish democracy: the judiciary within the spanish political

Medieval Islamic Society - . between 600-1250 islam develops into a major religion spanning 3 continents and an empire

Medieval Society Quiz - . 1. to become a knight you had to be the son of who?. 2. what do you call all the land that a