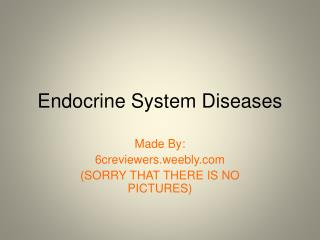 Endocrine System Diseases. Made By: 6creviewers.weebly.com (SORRY THAT THERE IS NO PICTURES). Disorders Of The Pituitary Gland . DWARFISM: A condition when a certain person grows up to 2 – 4 feet (when fully grown)

Chapter 18: The Endocrine System - . what is the importance of intercellular communication?. endocrine system. regulates

Assessment and Management of Patients with Endocrine Disorders - . by linda self. glands of the endocrine system.

Types & Causes Of Endocrine Disorder - Here is what you need to know about endocrine disorde, it's types and causes.