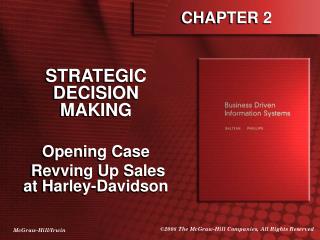 CHAPTER 2. STRATEGIC DECISION MAKING Opening Case Revving Up Sales at Harley-Davidson. Richard Sears Decides to Sell Products Through a Catalog. Sears Roebuck changed the shape of an entire industry by being lucky enough to discover a huge untapped market that lay waiting to be discovered.

Harley-Davidson - Almost half of all harley-davidson motorcycles produced are sold for use by the ... among other