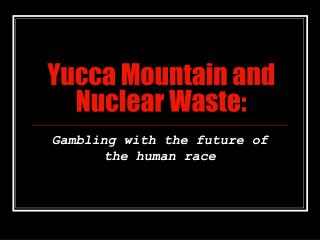 Yucca Mountain and Nuclear Waste:. Gambling with the future of the human race. This is Yucca Mountain, Nevada. Scary Facts. Radiation from the bombs dropped on Hiroshima killed __________ people in a year. Scary Facts.