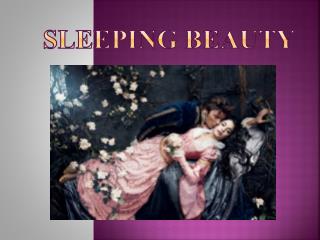 Sleeping Beauty . History. Sleeping Beauty first comes from a romance novel printed in 1634, “ Perceforest ”. Many element of sleeping beauty were taking from this tale. The next version is “Sun, Moon and Talia” written by Giambattista Basile in 1636. Sleeping Beauty - . by. ryan, yuki, jin hwan. a: if you want the princess to touch the spindle go right. b: if you want

The Sleeping Beauty - . ruth ainsworth. sleeping beauty : a fairy tale classic, the first in the set published in 1697 by

Sleeping… - . 1/3 of our lives are spent sleeping… the record for the longest period without sleep is 18 days, 21

Sleeping - . by: brian alexa. why sleeping?. most of my time is spent sleeping naps dreams it is when i am happiest

Sleeping Newborns - The babies are seen snuggled into warm blankets and cushions, some adorned in cute woollen hats or

Co Sleeping - . the safety of bringing a baby into an adult bed has been the subject of much debate in modern society,