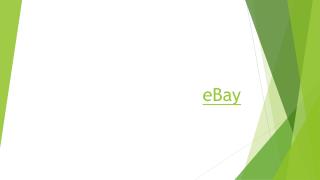 eBay - . questions. questions. what service does ebay provide? what role do customers have in providing this service? how

Using Ebay - . how to buy and sell safely and securely. an online auction site items are bought/sold by/to the highest

Ebay Integration - Considered one of the largest product search engines on the web, ebay should be a crucial part of your

eBay Breach - The attack actually took place between the months of february and march. however, the irony is that it was