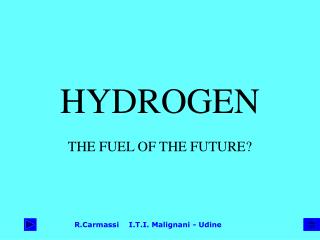 HYDROGEN. THE FUEL OF THE FUTURE?. Hydrogen (H is the chemical symbol) is the most abundant element in our universe. On the Earth surface (land, water, atmosphere)0.88% is hydrogen. It is everywhere: water contains 11.2% hydrogen but….

Hydrogen - . the student will be able to explain:. position of hydrogen in periodic table isotopes of hydrogen methods of

Hydrogen – Fuel of the future ? - . charactaristics of hydrogen. hydrogen is the first element of the periodic table.

16-8 The Advantages and Disadvantages of Hydrogen as an Energy Source - . concept 16-8 hydrogen fuel holds great promise

Hydrogen - . by: john vang &amp; gee yang. what is hydrogen. is the simplest atom and is even lighter then air. a

Hydrogen - . hydrogen was discovered by henry cavendish at 1766 in london, england. origin of name: from the greek words

Hydrogen Material: - Production of hydrogen properties of hydrogen Why is hydrogen unique Test for hydrogen Uses of hyd