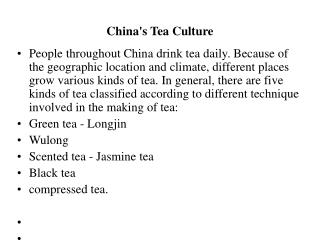 China's Tea Culture. People throughout China drink tea daily. Because of the geographic location and climate, different places grow various kinds of tea. In general, there are five kinds of tea classified according to different technique involved in the making of tea:  Green tea - Longjin