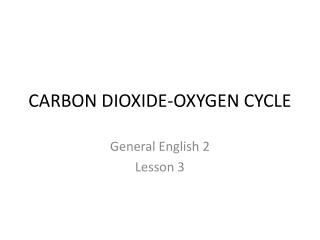 CARBON DIOXIDE-OXYGEN CYCLE. General English 2 Lesson 3. Gills/ ɡɪl / one of the organs behind the head of a fish that allows it to breathe Survive / sə (r)ˈ vaɪv / to continue to exist Plankton /ˈ plæŋktən / very small animals and plants that live in water and are eaten by fish Carbon Dioxide- Oxygen Cycle - . ∞. plants and animals are linked for survival through the carbon dioxide-oxygen cycle.

Oxygen and Carbon Dioxide Transport - . sbi3uo. oxygen transport. oxygen is transported from the lungs by the

Transport of Oxygen and Carbon Dioxide - . how gases are transported. introduction. to explore how o2 is transported in

Transport of Oxygen and carbon dioxide - . learning objectives. at the end of this session students should be able to

Transport of Oxygen and Carbon Dioxide - . lesson objective : to describe and explain how oxygen and carbon dioxide are

CARBON DIOXIDE - . c. o. o. each oxygen has 2 single electrons, needs to share two more for an octet, and to resemble

Carbon dioxide - . rag sheet &amp; wordbank. red amber green (no idea) (some clue) (know it) . what do you know