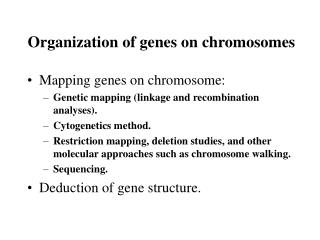 Organization of genes on chromosomes Organization of genes on chromosomes

Why genes are regulated? - . minimize energy consumption--why express a gene you do not need? (economy) control

Lecture 17 Chapter 9 Marker genes - . neal stewart. discussion questions. 1. why use marker genes? 2. what are some

Chapter 9 and some of 8 DNA and the Molecular Structure of Chromosomes - . chapter outline. functions of the genetic