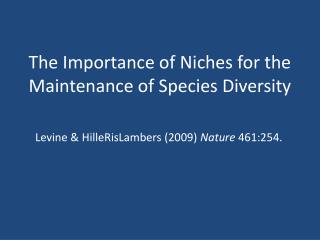 The Importance of Niches for the Maintenance of Species Diversity The Importance of Niches for the Maintenance of Species Diversity. Levine & HilleRisLambers (2009) Nature 461:254. How is ecological diversity maintained?. Classic Theory Neutral Theory. Classic Theory Coexistence requires competitors to differ in their niches

The Importance of Niches for the Maintenance of Species Diversity

Diversity - . what is diversity?. diversity is often considered as a function of two components: a) the number of

BIODIVERSITY = biological diversity - For a landscape of many ecosystems to perpetuate over time, there must be a

Chapter 4 - . environments and life sir david ochieng www.davidochieng.net. what is your current classification?.

Measuring Diversity - . community a. community b. species diversity. often defined as a combination of the number of

Biodiversity - . a new multidisciplinary science is the variety and variability among living organisms and the ecological

Measuring Species Diversity - . think about what’s ahead . . . starter exercise. discuss in pairs the title of this

4.2 Niches &amp; Communities - . what is a niche? range of physical and biological conditions in which a species

Species Diversity Web quest - . go to http://www.discoverlife.org/mp/20q. once here you will pick one guide to work on.

Diversity and Stability - . by ariana strandburg-peshkin. does increased diversity lead to increased stability?. what is