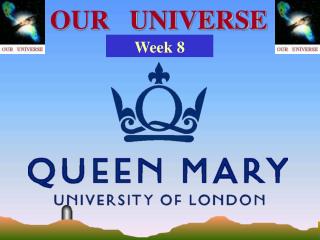 OUR UNIVERSE - . lectures 7 - 9. the physics of radiation &amp; spectroscopy the windows to our universe &amp;

Our Universe - . universe teks (8.13)  science concepts. the student knows characteristics of the universe. the student

Our Universe - . by: elijah gomez ashlyn mackenzie jonathon sanchez alora justine. how does the world affect me?. we live

Our Universe - . our galaxy is known as the milky way. there are thousands of other galaxies in our universe. other

Our Expanding Universe - . what is a theory?. not a fact a hypothesis that has lots of support accepted hypothesis. big

Welcome to our PowerPoint presentation about butterflies! - . lincoln school second grade 2001 created with the help of:

Our Universe - . universe objectives ( 8.8)  science concepts. the student knows characteristics of the universe. the

Our Universe - . what is space?. space is space, empty space. it is full of energy and matter. you can’t even think

OUR UNIVERSE - . (how we are much tinier and younger than we earthlings think.). the big bang. about 14 billion years ago

Our Universe - . explained. our universe is made up of three things:. spacetime matter energy. spacetime. the 3

Our PowerPoint Presentation Anastasia + Hugo - . a little bit about me. my most favourite hobby is teaching my dog

Welcome to our powerpoint presentation on - . mammals. lets learn about mammals. this is a abyssinian colobus monkey.

PowerPoint Presentation - The Origin of the Universe