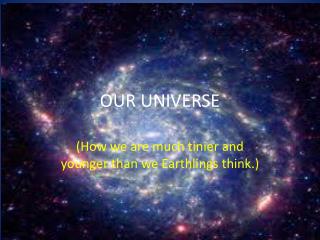 OUR UNIVERSE. (How we are much tinier and younger than we Earthlings think.). THE BIG BANG. About 14 billion years ago the entire universe was contained in a bubble that was smaller than a period. . (like this, and this is a screen period, a pencil period is even smaller)

Friedmann’s Equation - A description of our Universe - . alexander merle (munich university of technology)