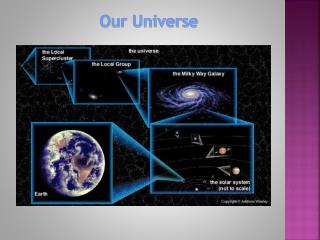 Our Universe. What is Space?. Space is space, empty space. It is full of energy and matter. You can’t even think what kind of stuff is in space. It’s an ocean of darkness and vacuum. It is not what you see in Star wars or Star trek, It is kind of different. A walk through the Universe.

Dark Energy from variation of the fundamental scale - . what is our universe made of ?. fire , air, water, soil !.

The Fine-Tuning of the Universe for Scientific Technology and Discoverability - . part i: background. review of anthropic

Origin of the Universe, Solar System and our Planet - . what do you know about the formation of the universe?. when and

Chapter 19 - . in the beginning. introduction. b y itself, the expansion of the universe does not prove that there was a