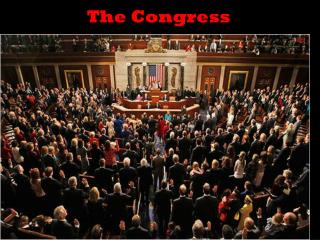 The Congress. The Congress. Congress = bicameral (2 house) legislature made up of a House of Representatives and a Senate Created by the Great Compromise of 1787 Powers listed in Article I Makes laws for the U.S. and represents the choices of the citizens

1470 Wavelength Endovenous Ablations - . the new wave in endovenous ablation. in 1989, puglisi and his colleagues of the

10/16 Warm-UP: - . name three “grievances” that the colonists were angry with the king about. declaration of

1 st Amendment - Congress shall make no law respecting an establishment of religion, or prohibiting the free exercise

1 st Amendment: Freedom of Religion - . the first amendment states that: “congress shall make no law … respecting an

-ACOSAP - COSTA RICAN PUBLIC HEALTH ASSOCIATION - - . the continuous fight in costa rica toward the approval of the fctc

15 th World Congress of the International Economic Association - . sovereign debt crises through the prism of primary

Be Ready: Prepare Together - Emergency preparedness. be ready: prepare together. public service announcement. “be