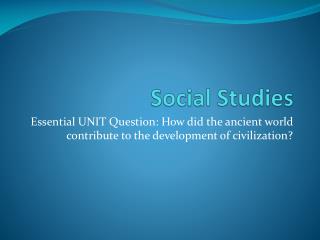 Social Studies. Essential UNIT Question: How did the ancient world contribute to the development of civilization?. Social Studies Standards. Case study of an early people of the Middle East (Sumer, Egypt, or Mesopotamia): 3.1 a, 3.1 c, 3.1 d. DO-NOW:. Update Table of Contents;.