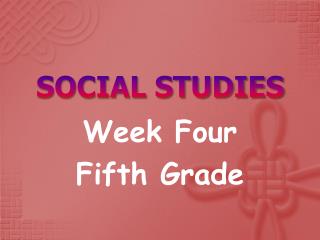 SOCIAL STUDIES. Week Four Fifth Grade. What were four new technologies that most greatly affected the daily lives of Americans during the 1920’s?. 1. Automobiles 2. Airplanes 3. Radios 4. Movies. What were two results of The Great Migration ? . Social Studies - . essential unit question: how did the ancient world contribute to the development of civilization?.