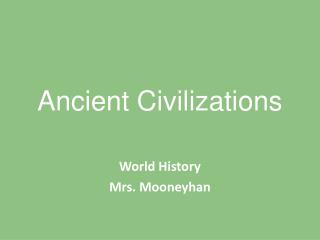 Ancient Civilizations. World History Mrs. Mooneyhan. Mesopotamia is at the eastern end of the Fertile Crescent. It lies between the Tigris and Euphrates Rivers. Due to their system of irrigation and increased food supply, the population increased.