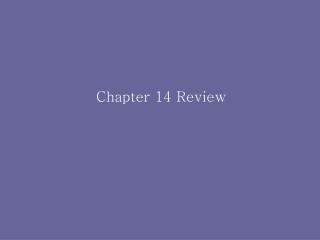 Ch. 14 Review - . climate. why would point a have the warmest climate?. the majority of the sun’s rays are absorbed at

Chapter 14 Review “The Behavior of Gases” - . chapter 14 review. charles’s law states that ____. as the temperature

BEHAVIOR OF GASES Chapter 14 - . importance of gases. airbags fill with n 2 gas in an accident. gas is generated by the

Review Chapters 14 and 15 - . evolution. which answer best shows an animal's adaptation to the tropical rain forest ?. a

Ch. 14 Review Game - . objective: review work and machines. what type of simple machine is machine a in wheel and axle

Chapter 14 - . vital concepts &amp; truths to know in john 14. there is only one way to heaven! it is through jesus,

Chapter 14 Review - Personality. chapter 14 review. purpose of personality theories. all of the following are purposes of