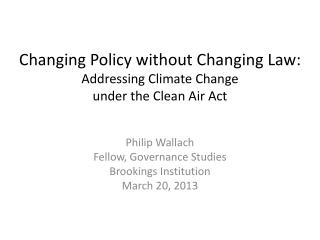 Climate change prior to 1900 - . the ice core record indicates that greenhouse gases co-varied with antarctic temperature

“ We do not inherit the earth from our ancestors, we borrow it from our children. ” - . native american proverb.

Alternatives for Resolving Climate Change? - . what should the law do?. 1. u.s. congress – clean air act (air